It’s been a long and hectic two weeks. Even though I braced myself for the whirlwind that is campus housing training, it still managed to take a lot out of me. When day 1 ended and I crawled into bed on Monday night, I tiredly worried that just one day had run me ragged. There were still many days to come, posters to make, programs to plan, names to memorize…and of course classes to prepare for. But the rest of training kind of flew on by, and I quickly became closer to my fellow Courtyard staff through the endless icebreakers and teambuilding activities.

When I first moved back to Courtyard, I honestly was missing my nice kitchen and living room in TBH very much. My room this year is considerably smaller than my room last year, but it’s the typical size of a Peer Mentor room in Courtyard so I can’t complain. Last year, I just lucked out and got the biggest PM room, which was in a triple cluster. During second semester, the two girls living with me actually transferred schools and moved out so I actually had an entire cluster to myself! It was strangely large and I actually didn’t even know what to do with all the space. Quite on the contrary, this year, I have a tiny single room in a 8-person cluster, and I feel like I can’t even fit everything I want in my room. It took several tries of arranging and rearranging my bed and desk to figure out how to optimize the space, and even now I’m not sure I’m satisfied with my choice. I’m trying to be as minimalistic and strategic as possible when it comes to arranging my things, and I’m having my parents take some extraneous items home for me. But even though it’s small, I do think it’s quite cozy. I never needed much space anyway – only just enough to live in. I believe I can quickly get used to this and feel at home here – it might just take me a little more time to get used to the general location  on third floor and living with seven other girls in the same cluster.

Housing training was largely the same as I expected from last year. The first afternoon included a teambuilding day at the student rec center, which was fun and quite exhausting. We played games like dodgeball, volleyball, tag, problem-solving activities, and the human knot. By the end of it, I think everyone was tired and ready to call it a night. But in the evenings, we have in-hall staff meeting time, which was also important to hammer out what policies and staff expectations to follow for the whole year. I think the biggest thing that was accomplished from the whole day was the fact that I knew everyone’s name on my staff, which has 28 people total. The majority of the rest of training was listening to lectures about programming, community, conduct, and other important things to recall from last year. I’m glad I have a year’s experience now, because I remember feeling overwhelmed last year from the plethora of information just thrown at me all at once. But it was nice to be able to bond with my staff during the week and slowly get to know individuals one by one. Most people know me as a reserved person because I typically prefer to watch things unfold in group settings rather than directly contribute to them. I’m not shy –  I just don’t prefer to be the center of attention or say something unless I have something relevant to say. This year, I do feel myself stepping it up more as a leader to speak my mind more and offer advice and insight.

Classes haven’t even started yet, and I already feel incredibly busy. I’m worried because it feels like my marathon training has taken a backseat because I’ve been so incredibly exhausted at the end of the day everyday. Training starts at 10 AM every morning and I usually don’t find myself with free time again until after 9 PM, so my only option is to wake up early to go to the gym. This would be fine, but it makes me exhausted for the rest of the day when I really need to be focused and peppy enough to keep up with my staff’s spirit. All of the different residence halls in Campus Housing are competing for a prize called the Golden Sparky, which essentially is a prize for the most spirited staff. We can earn points for positive spirit and behavior (making cheers, showing up early, participating) or lose points for poor behavior (texting during training, sleeping, poor sportmanship). Courtyard actually DID win last year, and we’re trying hard to keep Sparky in Courtyard, so I want to try to be on my best behavior at all times. But sometimes I must admit it’s so difficult to keep my eyes open when we’re going over things I feel like I know and I’m exhausted from running 7 miles in the morning. My hope is that I’ll fit in gym time more easily when I can plan my schedules more, and then I can catch up to the proper mileage for training. I hit 12 miles last week, and the next goal is 14! 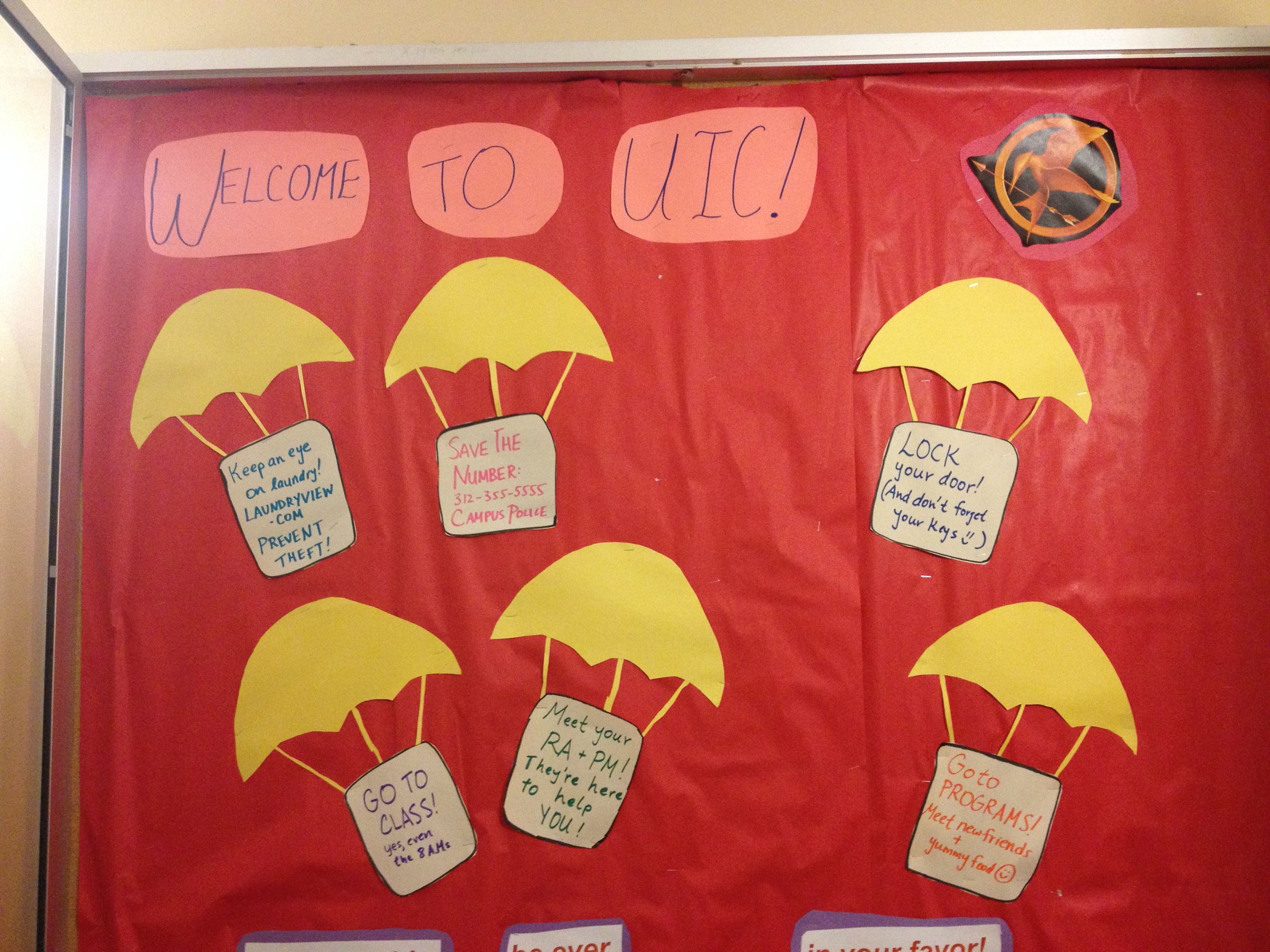 My first bulletin board of the year! - Hunger Game theme

Last week and this week might be Weeks 0, but I’m feeling busier than ever. But my bulletin board (Hunger Games theme!) is up, my Mockingjay-personalized door decs are all over my hallway (I have a 60 residents this year!!), and it’s time for New Student Days events.

This is going to be a good year.

Hi, I'm Sarah! I am a junior Neuroscience student in GPPA Medicine who is still trying to figure out exactly what I want to do in my life. One day I want to be fluent in Russian and explore Eastern Europe. In my free time, I love running, playing piano and guitar, and reading. I currently live in Courtyard residence hall as a Peer Mentor but my home is in Naperville.
View all posts by Sarah Lee →