This week I traded in my scalpel for a reflex hammer and began a 2 week stint on the neurology service.  The verdict? Well, aside from the fact that everyone on the neurology floor seems significantly more well-rested (and by extension nicer), I’m finding that neurology deals with a level of detail and intellectual exploration that surgery never even began to broach.  At the risk of sounding trite, neurology is far more… well, cerebral. 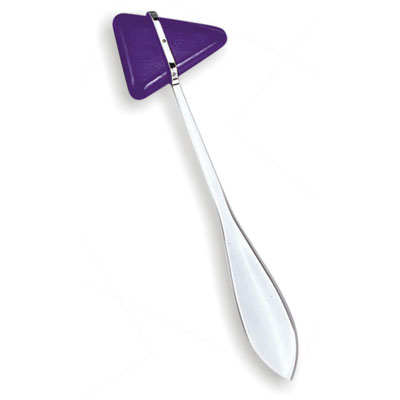 Somewhere along the line in the first two years of med school you are taught the neurological exam by rote. You memorize the exact maneuvers and mechanics of all those weird tasks that doctors ask patients to do (finger to nose, walking heel to toe, etc), but whose purpose you never quite understood, and still at that point don’t understand.

Remarkably, when done correctly and with a keen eye for the subtlety and nuance of patient reactions, these tests are elegantly designed to pinpoint specific neurological deficits, and have the capability of localizing a lesion in the nervous system, such as a stroke, to an incredible degree of accuracy.  All this without using invasive measures!

And yet, before the actual experience of working with patients whose exam findings are abnormal, it’s hard to have any real appreciation for this.

As far as I’m concerned, the neurological portion of the physical exam is the figure skating of diagnostic medicine: looks simple, but is anything but.  Things like eliciting a proper reflex, which look so easy to the untrained eye, can easily turn into a clinical nightmare.  With multiple failed attempts and disgruntled patients tired of being hit with a hammer, the finding of an absent reflex inevitably brings up the self-doubting question: does the patient really not have the reflex for neurological reasons, or is it just a reflex that you weren’t able to see due to lack of skill.  Of course at this stage of training (or lack thereof), the latter is much more likely, and often leads to awkward moments during morning rounds when you have to admit as the lowly third-year medical student, that you’re not quite certain what the status of the reflexes were.

Nonetheless, this is all part of the process. And with a supportive team of residents and an attending who’s willing and eager to teach, the technical challenges of performing a good neurological exam become less of a threat and more of a way to prove  and improve your clinical skills.

Whereas surgery is primarily concerned with fixing the problem at hand via physical manipulation or removal of diseased tissues or abnormal structures in the body, neurology prides itself on merely identifying abnormalities, often with limited resources to fix the problem once it’s elucidated.  And if there’s one detractor from the field, it would have to be that: the fact that there are few magic bullets or total cures.  It seems that all-too-often – take the case of stroke for example – neurologists are happy with partial improvement over time, even if it’s not full recovery to baseline, or at the very least, are content with preventing a recurrence.

From a personal standpoint, neurology is appealing in that it encourages and demands extensive thought and logical thinking, and takes into account various aspects of a patient’s life that other areas of medicine often shirk, making the process both impressive and entertaining to watch.  A skilled neurologist examining a patient is tantamount to a seasoned detective gathering clues and lining up a series of possible diagnoses as culprits responsible for the problems that the patient is presenting with.

At least for the time being, I’m pretty excited to be filling the position of gumshoe under these detectives.

Justin is currently in his third year of medical school at UIC's College of Medicine, and is hoping to pursue a career in internal medicine. He has a strong interest in addressing the health needs urban communities and is part of the College of Medicine's Urban Medicine program. Aside from academics, Justin enjoys cooking, listening to public radio, and perusing the New York Times website. He is also a trained pianist and self-professed lover of all kinds of music.
View all posts by Justin Fiala, MD Candidate →