You did good, son

It really feels good to hold events for the public, whether it is going to some space like a high school class or just nearby on campus. Being there for the whole experience is the icing on top of the cake! Watching my fellow future physicians suture for the first time was really exciting, and even though I probably won’t be a plastic surgeon (my first few sutures were quite terrible, lol), I hope that the activity instilled more motivation to pursue medicine in general. The CHI-FEST Suture Clinic, partnered with Kaplan and the U.S. Army, was a great success! I’m so proud of my pre-medical club members who participated in CHI-FEST (Community Health Initiative) as well as those who figured out all of the logistical details to make these events possible. 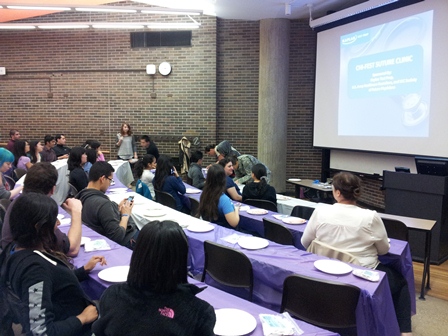 We had a great turn out at the SFP CHI-FEST Suture Clinic Event partnered with Kaplan and the U.S. Army. We learned the simple, interrupted suture as well as the simple running suture (I did not attempt the latter because I was still busy learning the first one well without cramping my fingers with the tools, lol!).

A few things about CHI-FEST: Society of Future Physicians (SFP) has a history of holding this event annually with other pre-medical organizations to engage the community concerning health topics as well as creating opportunities to network with each other and get to know current health professionals in the field. As the vision of CHI-FEST is noble, the actual orchestration of making this event possible was never really realized for the past 4 years that I have been here. There would be a medical student panel and physician panel, which was great, but nothing larger-scale than that for the public.

This year, however, we were able to have this super awesome suture clinic at UIC, invite UIC medical students for a panel and invite UIC alumni who were physicians (and a PharmD!) for a panel, have a space for our Health Education Program and Social Outreach Program members to present their community projects / educate fellow college members on health issues and had a “pre-health mixer” where we got to meet and network with other students. Ah, it was fantastic! 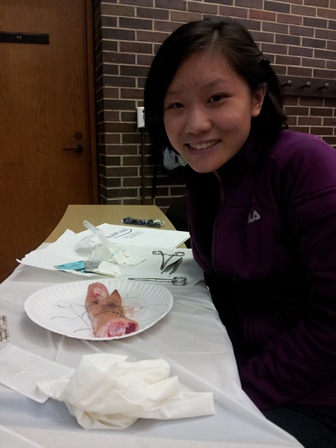 My horrible suturing, haha! We used pig feet to learn how to suture with 3.0 nylon and silk. The techniques were just like the ones I see the ER doctors use in the actual ER (like if someone comes in with their skin cut from glass). My first few sutures were pretty bad (so loose), but it got better as I struggled less with the tools. 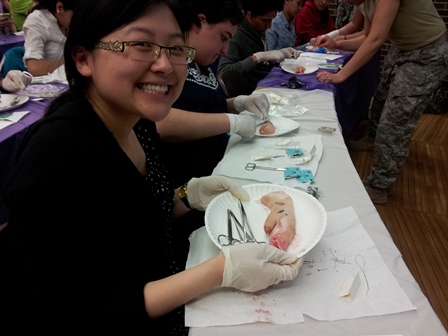 My friend Alison had great suturing technique! "Future plastic surgeon!" - U.S. Army representatives who taught us how to suture.

Those events spanned a hectic 2 days, and before that we also had our elections for SFP. I had to run over from the UIC Student Research Forum (SRF) to get there because the staff were still tallying up the judge’s scores. This was my first time presenting a research poster at the UIC SRF event and it was really awesome! I’ve always wanted to go and present my research, but it would always be during class time and I could not afford to miss class. This year, while it did coalesce with BIOS 221 (genetics lab), we were just doing class presentations and the instructor said I could be excused. Phew!

There were so many different topics and the judges were varied as well. My poster is basic science heavy, so when my first judge told me he was a law professor, my mind was like “Oh crap I have no idea how this will be, but here I go!” When I had two judges from the medicine department come by, that was a ton easier to talk about my research and they seemed pretty interested in my work (which got me more excited to talk about it, haha!). I didn’t win an award, but that’s OK! The experience was really fun! The reception right after presentations was nice since there was food and whatnot. I sat next to an orthopedic surgeon and we talked about charting and documentation (told him I was a scribe!). After my talk with him, I think he’ll probably look into hiring scribes for his office, haha! Too bad I can’t scribe outside of my job, but I don’t mind. I really love my scribe job, as inconvenient as the hours are with my school schedule and research schedule. I’m just happy that the semester is almost over so that I can spend my summer doing research and working in the hospital (and paying off those loans!). 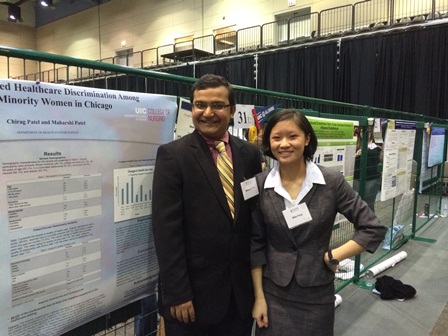 I took a picture with my fellow SFP pal in front of his poster at the UIC Student Research Forum! Thanks Maharshi for the photo!

I still haven’t heard back from Fulbright yet, but I’ll definitely keep you all in touch with my plans! I have a weird feeling it will be announced when my MCAT scores come out (April 22 apparently).

Ah, what else is new…oh yes I attended the 42nd Annual Chancellor’s Student Service and Leadership Awards! I’ve never been to this event before, and I also did not know who nominated me for an award (the Chancellor’s Student Service Award) since the person remained to be anonymous on the online form. Well, whoever you are, thank you so much for the nomination! I wish I understood that I received the award (I thought it was just a nomination, so I didn’t think about dressing up all fancy like everyone else was). Three of my fellow SFP members were inducted into the Activities Honorary Society (a big deal), so I was glad to watch them light their candles! I felt very proud that they were representing the organization as well as their other organizations that they’re a part of at UIC. 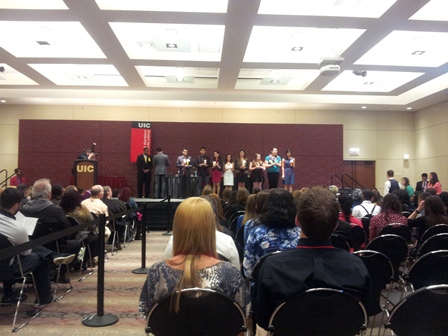 I went to the 42nd Annual chancellor's Student Service and leadership Awards and here is a picture of the inductees for the Activities Honorary Society. Congratulations to my fellow SFP Members/Friends Avni Bavishi, Elizabeth Garcia and Masood Qader! Another shout out to a fellow blogger, Michael Queroz!

I am a senior and an acclaimed workaholic. While I like to keep busy academically, I really enjoy the simple pleasures of hanging out with friends and family, playing video games, or listening to music. When life seems to go well, allergies and eczema like to butt in and make me miserable. I hope to go into medicine so that I can have a better understanding of skin and the immune system to help myself, and to also help others facing the same problems I have faced since I was three.
View all posts by Milie Fang, Biological Sciences / Pre-medicine →