“Were there any good ones this morning?” asked my illustration professor as I passed him in the street.  I had told him that I just came from an early morning session of drawing in the Operating Room at UIC.  My response was at first cheerful and satisfied, “Yes, a mastectomy!”  But then I hesitated.  And my prof was having the same thought going through his head.

I agreed.  I had had a frustrating morning of rising early to watch a surgery for 2 ½ hours that turned out to be a different surgery than I thought- the surgeons had switched rooms before I got there. I waited for that “key moment” that our surgical illustration professor tells us to watch for and illustrate… and it never came. I was looking for the wrong thing!  Strangely, both the surgery I intended to watch and the surgery I ended up watching had to do with an incision in the neck. So, innocent mistake. At least it was me mixing up the surgeries, and not them!

That’s why I was pretty delighted when I walked into the room where the mastectomy was to take place and the surgery was about to begin. It was taking place an hour later than scheduled, and I had gotten lucky. So I introduced myself to a nurse as a medical illustrator, and she said it’d be fine for me to stand in and illustrate, but that I shouldn’t touch anything blue.  All of the blue material in the room was sterile, and the clean instruments sat sparkling on the blue surfaces.

I stood next to a third year medical student who was also observing the surgery. He and his co-student were switching off between observing and partaking in surgeries that day. It was his turn to watch. His partner held the instruments and did some of the suturing at the end.

It turned out to be a wonderful subject to draw, since the surgery was “open” (not through a scope and using a video camera), the surgeons weren’t standing in my view, and it incorporated figure drawing as well as the depiction of instruments.  It was not a full-blown mastectomy–it was “partial”–which means they opened up the breast and removed the cancerous material.  They called the blobs of fat “specimens,” and poked and prodded at them before sending them off in sterile bags.  I will not describe the surgery any further, but the key steps are illustrated below in some sketches, if you’d like to see. 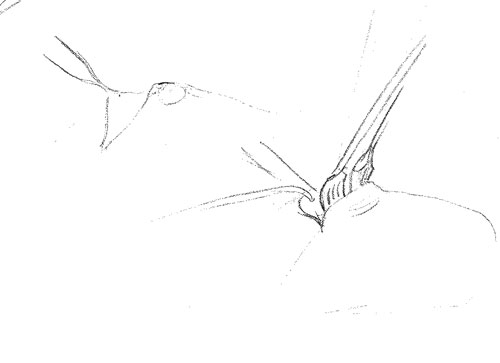 incision and retraction- opening up the breast for removal of tissue 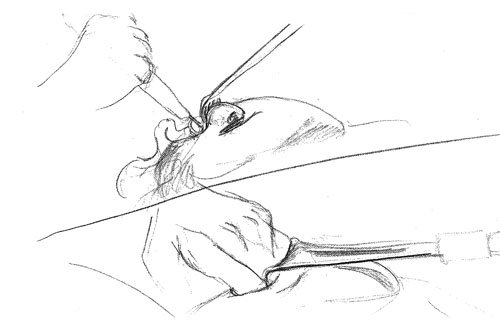 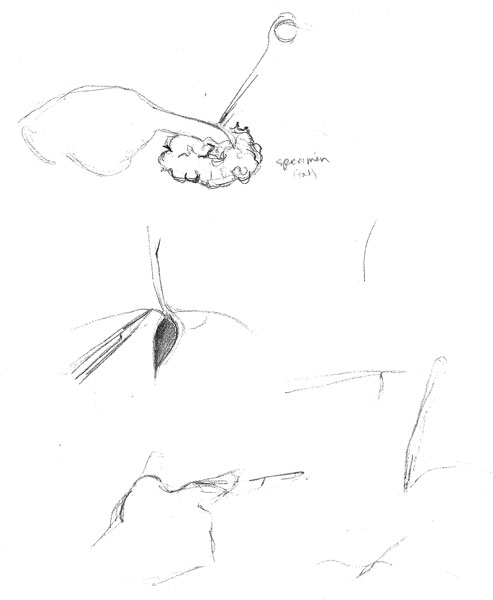 The extracted sample and suturing the incision 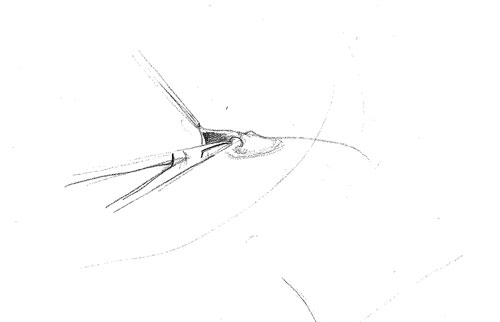 closure of the incision