I went to a surgery today that I’ve wanted to see for a while now.  It’s called a “carotid endarterectomy,” and it involves a surgeon removing plaque from a person’s gigantic carotid artery (the one you can feel pulsing in your neck.) I’ve wanted to see it because it’s what I call a pretty “primitive” surgery; even though some pretty fancy tools are used, the surgery is made up of 5 basic steps: incision, finding the artery, opening the artery, removing plaque, and sewing the person back up. While the steps are basic, it probably couldn’t have been done 100 years ago because clamping a person’s major artery so that blood doesn’t run through it (so you can remove the plaque) is a very complicated thing and requires the right balance of anesthetic, surgical speed and precision.

The surgeon was the first female surgeon I’ve seen in the OR. She was amazing. Actually she seemed unnecessarily mean at first (snippy to the resident) but really she was just very precise and demanding in the preparations for the surgery. And she liked me- a lot of surgeons don’t acknowledge the medical illustrators, but this doctor asked me my name and made sure I had a prime spot, directly behind her and towering over her on a stool. It was awesome! At one point I said to myself, I better not topple forward in excitement, because something seriously bad could happen. So when she stepped in my view, I waited patiently instead of trying to lean in.

Here are my drawings, in chronological order. I waited two hours in the room before they started, so I got some time to draw the x-rays of the patient’s arterial system in the neck. 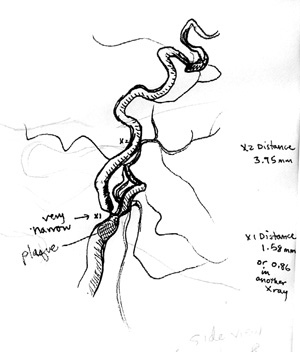 X-ray, side view of the carotid a. and its branches. You can see where the artery narrow due to plaque build up. 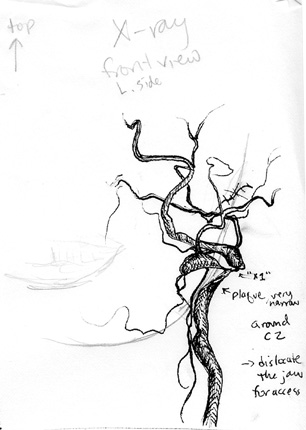 X-ray, front view of the left carotid artery and its branches. 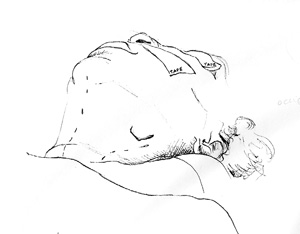 The patient, anesthetized, with markings on the neck for incision. 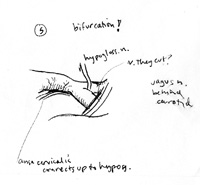 The first view of the carotid artery and its bifurcation (where it becomes the internal and external carotid arteries. The internal goes straight to the brain. It's pretty important.

Pulling back the artery with rubber band retractors.

Removal of plaque. (this is where she started working fast.)

Drew tools while I couldn't see anything.

The plaque sample sitting in a jar. GOT IT!